Some of Sawyer’s earliest memories were trouncing through the woods with Abel or aging Bowen. In the winter, the snow seemed to be piled up to Sawyer’s waist and after returning from deer hunting one December afternoon he remarked to his mother, Rosa Lynne, “It was like wading through a pool of mashed potatoes!” In the summer he could hardly see over some of the tall grasses. When a day of local hunting or a trip to the Allegheny Mountains was planned, Sawyer’s excitedness kept him awake at night.

Still, there was one thing that seemed to be missing on these excursions, and at home. Sawyer had just a hint of jealousy toward most of his friends in Beldor Hollow. He had begged and pleaded with Abel and Rosa Lynne to get a dog.

“But mom, the Shomakers have three!” he’d say. “But dad, we need a good dog for duck and goose hunting! Or to tree a coon!” Abel and Rosa Lynn knew it would be good for Sawyer to take care of a dog and learn about the responsibility that comes along with an animal. So, on a sunny spring day, Abel told Sawyer they were going for a ride. They hopped into the beige Ford pickup and headed into Elkton.

Bud’s Outdoor Store and Supply was more of a place for meeting than shopping, though the necessities for camping, fishing, and hunting could hardly be kept on the shelves depending on the time of year. The weathered boards on the front porch looked ancient to Sawyer, possibly more so than the creaking rocking chairs where the old timers sat in overalls chewing on the stub of a cigar. The wide storefront windows displayed some of Bud’s most prized takes from the mountains. Inside, a ten-gallon washbasin filled with coal sat beside a potbelly stove that was always roaring during the colder months, surrounded by rocking chairs, of course.

When the old Ford creaked to a stop on the street in front of Bud’s, Sawyer assumed they were getting some fresh hooks, lures, or plastic grubs and worms. Smallmouth bass season on the South Fork of the Shenandoah River would be starting soon. “Good morning, Abel. Sawyer,” Bud said as they entered the store. “I’ve got them in the rear. Come on back.”

Sawyer quizzically looked at Abel. He had never been in the back of the store. It smelled of powder and solvent. There was an old recliner with faded fabric and tears exposing the foam cushion in front of an even older looking TV, a bar stool beside a wooden countertop with a newer model Winchester broken down, and even a refrigerator. Sawyer thought Bud must practically live there. He followed Bud and Abel around a corner and then he froze. He looked at Abel with a questioning smile. “Go on son, your mom and I decided it was time. It’s your pick.”

Sawyer couldn’t believe his eyes. There were five chocolate and black lab puppies enclosed in a circular fence lined with newspaper. He stepped over the fence, knelt down, and was immediately surrounded by the puppies. One of the five, however, was not attempting to jump into his lap. This one was patiently waiting, almost asking permission to come and sit with him. “That one,” Sawyer said.

“He knows a well-tempered dog when he sees one,” remarked Bud. 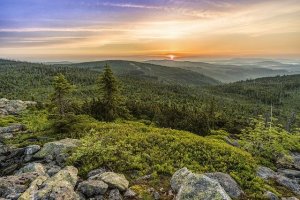 Most of the ride back home, the black lab quietly sat in Sawyer’s lap, putting his front paws on the door window every once in a while trying to lookout. He was already a sturdy twenty pounds at just over two months old. Sawyer contemplated and figured out it was six months until goose season. The lab wouldn’t be trained in that amount of time, but he wanted to start him right away. “What’re you gonna name him?” Abel asked.

Fred was an old man who had lived in a clapboard house on the banks of Hawksbill Creek near the base of the mountains. As a World War I POW, subsistence farmer, and self made entrepreneur who had raised his daughter on his own, minus the help of Beldor Hollow women when his wife died from tuberculosis right before the vaccine came out, he was highly respected, had an air of authority, and stolid resoluteness. Fred had died just a year ago and his daughter had given Sawyer his inkwell that he still used to write letters with. She knew Sawyer enjoyed sitting on the porch swing with Fred and listening to his stories and letters from friends and family. Sawyer knew Fred the black lab would emulate the qualities of Fred the friendly neighbor.

Sawyer In The Woods