Lake Anna is a state park created in 1972 and is located in Louisa, Spotsylvania and Orange counties. The lake is 17 miles long and is set on 13,000 acres of land. It is a popular fishing spot for anglers of all abilities. Centrally located and within easy driving distance of Charlottesville, Richmond, Fredericksburg and Washington DC, this State Park’s lake is a dream location for a summer holiday fishing trip. The park is open from 7am until dusk. The park office and visitors center are open from 8 until 4:30. While you are vacationing and fishing in this beautiful park, you can remain on site by taking advantage of the campsites, yurts, camping cabins, cabins and lodges that are located throughout the park. The southwest side of Lake Anna is private. You can take a drive through the neighborhoods located here but you must be a lucky homeowner or know one in order to gain access to the water for fishing. The northeast side of the lake however is public and those on holiday or enjoying a day of fishing will have easy access to several public ramps and the water in general. Fishing is very popular at Lake Anna and you will find 3 types of fish in abundance in the Lake.

Large mouthed bass can be found in the shallow waters of lake Anna between March and April. They will be sluggish after the winter and will need some encouragement to bite but this can be a great time to catch larger sized fish. Around the month of April, the fish go off to spawn and there will be a lull for about a month. Once the month is up, the females will return to the shallow waters and will be aggressively looking to feed and will be much easier to catch. As summer progresses and the water warms the large mouthed bass will move out into deeper waters. There is no minimum size requirement to keep your catch though a vast majority of people practice catch and release. The creel limit for largemouth bass is 5 per day per angler. A trophy fish, should you be lucky enough to catch one, is any bass weighing at least 8 pounds or measuring at least 22 inches. 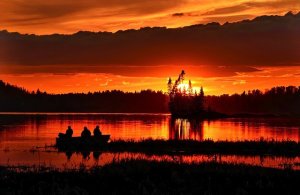 Black Crappie is another abundant and popular fish that you will find in Lake Anna. Black Crappie is also known as specks, freckles or silver perch. They are a tasty pan fish and plentiful throughout Lake Anna. Like large mouthed bass, Crappie can be found in the shallow waters getting ready to spawn in early March. At this time they will be much easier to catch due to their more aggressive nature. By mid May, as the weather becomes warmer, the Crappie will begin moving into deeper water. There is no minimum size requirement to keep your catch of Crappie. The creel limit for Black Crappie is 25. A trophy size Crappie is any fish weighing at least 2 pounds or measuring at least 15 inches.

Striper is a fresh water fish that in recent years has begun to be  found more abundantly in Lake Anna. In early March they can be found in the two rivers of the lake feeding on small Crappie. During the summer months, the best time and place to catch Stripers is during feeding which is very early in the morning in the middle of the lake. Once the sun gets high enough to warm the water, the Striper will have moved deeper into the cooler water and will be much harder to catch. There are minimum size requirements to keep your catch of Striper. In order to keep your Striper catch, the fish must be at least 20 inches. A trophy sized Striper is rare in Lake Anna and the average size fish is between 5 and 7 pounds. In Virginia a trophy sized Striper, should you be lucky enough to catch one, is any fish weighing at least 20 pounds or measuring at least 37 inches.

A fishing trip to Lake Anna may be every angler’s  dream holiday. Whether unlucky with your catch or it feels like a long day, you may not wish to cook. Take advantage of one of the many local area restaurants before turning into your rented cabin or yurt. Better yet, purchase a beautiful home in the area for a vacation home all year round that provides you with beautiful views and a lake full of fish.